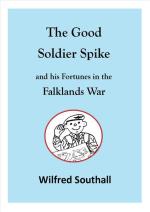 Joseph Spike: A former paratrooper who, a decade ago, was discharged from the British army as both mentally subnormal and profoundly mentally subnormal, and who is currently serving as a waiter aboard the Cunard liner SS Canberra.

Maggie: A self-recriminating, aggressive head of a school for nannies; a deep-down lesbian radical feminist and former acquaintance of Joseph Spike. Not to be confused with Maggie.

Maggie: A manic nurse at a boys’ prison and former colleague of Joseph Spike. Not to be confused with Maggie.

Maggie: The prime minister of a former great imperial power, one of the remaining colonies of which is about to be invaded by aggressive foreigners and simultaneously liberated by its rightful owners.

The Reverend Captain Trevor Churchill-Thatcher: A Roman Catholic chaplain; a descendant of the first Duke of Marlborough who finds his way by a convoluted route into the British task force en route for the Falklands, and by a no less plausible route out of it.

Lieutenant-Colonel Herbert ‘H’ Jones: A British parachute battalion commander whose career might be about to be influenced by one Pte Spike J.

Lieutenant-Colonel Italo Piaggi: An Argentinian infantry battalion commander whose career might be about to be influenced by one Pte Spike J.

First-Lieutenant Juan José Schickelgruber: The sharpest military mind in all of Latin America; a man whose lowly rank belies his potential ability to influence great events; a brilliant tactician who, in the right place at the right time, might just be able to change the face of history.

Monica Harzburg: A frustrated American travel writer smuggled into the history of the Falklands War as the only conceivable love interest once battle has been joined, who Joseph Spike is destined to meet aboard a Chilean merchant ship bound for Brazil while earnestly trying to find his way to the Falkland Islands and the Glorious Licking.

Lieutenant Rudolph Lucas: Probably the best subaltern in the British army, who is put in command of a platoon of invalids known as F Troop.

Private Iain Hopkinson: The ugliest soldier in the British army.

Private John Balham: The unluckiest paratrooper in the British army.

General Mario Menéndez: The commander of the very large Argentinian garrison dug into the impregnable defensive positions in the mountains of the Malvinas; a man who could surely not under any remotely plausible circumstances be induced to lose the war.

Buy The Good Soldier Spike and his Fortunes in the Falklands War for Kindle.